Ten fabricators you should know about in Scotland 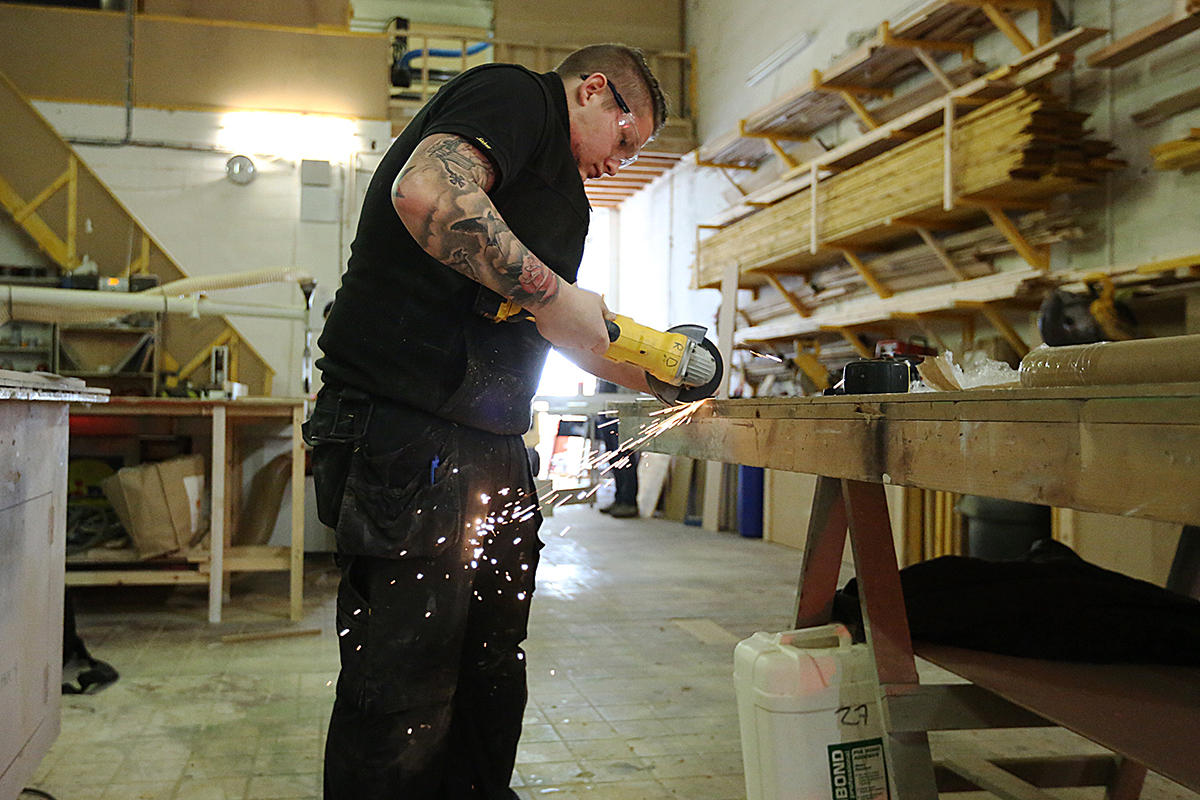 Ever found yourself looking at a sculpture or an installation and wondering how on earth it was made?

How did they get a material to look like that? How on earth did a sculpture that size, fit in their studio? How did they figure out the engineering challenges of installing such a piece? The secret, behind the work of a great many individual artists, design collectives and architects, will be an artist fabrication studio.

Fabricators are those people that will build you ‘almost anything’. Primarily working on one-off projects, their skills are an extension of cabinet making and joinery; mixed together with whatever process is needed for the job - be it welding, painting, casting or sculpting.

In Scotland there are a growing collection of these bespoke fabricators; building small manufacturing businesses realising the visions of artists, and becoming translators between ideas and production. Most often, they work not only on the specialist fabrication of fine art, but on the creation of all sorts of bespoke work, including film, TV or theatre sets, prop building, prototypes for designers, exhibition builds or museum installations.

Here are ten bespoke fabricators in Scotland that you can find listed on Make Works. 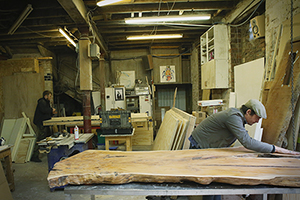 If you watch the way that Simon Harlow, director at Silo Design and Build, rolls his cigarettes, you just know that he was made to make things. He has an inherent fascination with materials and process, and works between woodwork, ceramics, to resins and metals. You’ll see the creations of his hardworking team dotted all over the city; from Ranjit’s Kitchen on Pollockshaws Road; to the recent installation for the Turner Prize exhibition at Glasgow Tramway. 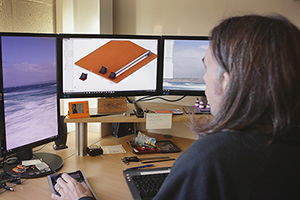 Slightly further north of the country, are interactive fabricators, FifeX near Tayport. Walking through the front doors, you’ll first hear the quiet whirring of a 3D printer, before recognising the heavy rhythm of a CNC machine next door. The unique aspect to this team of three, is their integration of electronics to the work, using technology like Raspberry Pi and Arduino to fabricate interactive exhibits, objects and installations. To spot a piece of FifeX’s work, head to the National Musuems of Scotland in Edinburgh and use those brightly coloured speaking tubes on the first floor. 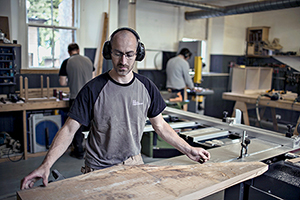 In an idyllic workshop, out in the east lothian countryside you find Old School Fabrications. Fine art graduates themselves, Neville and Scott started fabricating for other artists as assistants on larger scale creative builds in Edinburgh. Realising they had a skill for the making side of things, they went out on their own in 2012, and have been fabricating impressive sculptures, like those huge pink acrylic spaces for Laura Aldridge's, 'California, Wow!' last year. 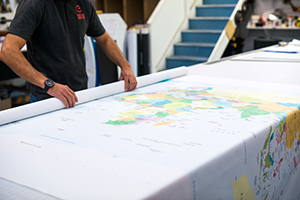 Specialising in print and graphics production, the task force behind Eastern Exhibition and Display have with the ability to print high resolution images onto almost any surface. Their intricate vinyls, brightly coloured signage, and large format prints turn up at the Edinburgh Fringe, in the National Museum, and the front pillars of the National Gallery. Eastern have a more polished approach to client work; which is many an architects, or project managers dream. 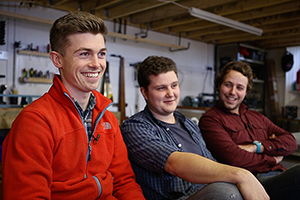 These three graduated from DJCAD a couple of years back, where they had a reputation among students for never being able to leave the workshop. It clearly paid off, as they are now working on a host of creative projects; such as revolving platforms for artists at Generator Projects in Dundee; the bar for Hidden Door Festival, and point of sale displays for jewellers like Rebecca Sarah Black. This year SPLINTR are also up for the Creative Edinburgh Start Up Award. 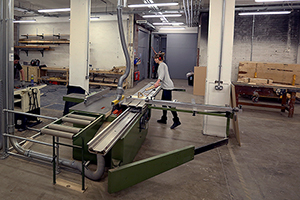 More commonly known for providing affordable artist workshop space, the technicians at Glasgow Sculpture Studios also offer a commercial fabrication service. They are a passionate collection of folk, who, using their impressive workshop facilities to fabricate work for artists like Jeremy Deller, Nathan Coley and Nick Evans. Our advice, is take in an idea of the kind of thing you want to create first, and the team can give you guidance on how to make it. 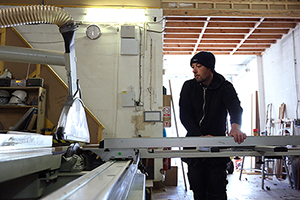 Down in one of those industrial estates in Leith, B Scenic can be found, in a tall metal unit, the walls filled to the rafters with stock materials, models and prototypes from past projects. There’s even an in-house CNC machine and laser cutter to find when you climb up the make-shift stairs. Tending to focus more specifically on set building, B Scenic make bespoke stages and props for the likes of Scottish Dance Theatre and the National Theatre of Scotland. 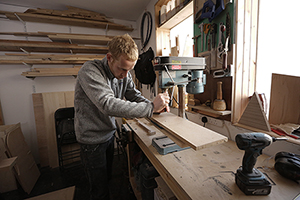 Another recent addition to Make Works, is George Thompson furniture. Having an affinity for making things since he was a teenager, George graduated as a sculptor, and started life as a fabricator by being the go-to when it came to building plinths for his peers. Now based in the Glue Factory, George builds sculptures and difficult-to-make things for both artists and designers of creative spaces throughout the city; such as The Distillery at The Whisky Bond. 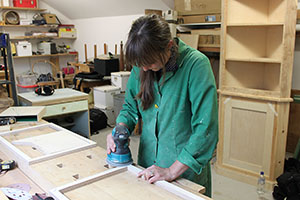 This handyman lady is a maker with purpose. Sporting a fantasticly green workcoat, she rocks up on site, tools in hand. Working from Albion Street studios, using the shared wood workshop, Sharon  works on projects from beautifully crafted wooden weaving frames for Dovecot Studios, to building shelves in design studios. 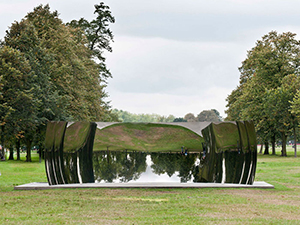 Though we haven’t made it to visit yet, Kelsen Technical cross that line between art installation and architectural construction. The team are yet another example of how manufacturing is a creative endeavor, with an approach about being open to new artistic challenge’s. As a result, they have worked on ambitious public art projects, like Michael Stumpf’s red and orange ‘Now Sing’ being installed about on the Reid Building last year. 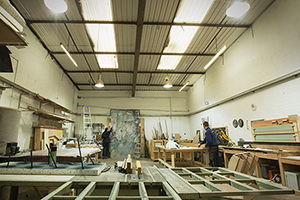 Sculpture and Design (otherwise known as Scott Associates) are a recent addition to Make Works, nestled away in Maryhill industrial estate and fabricating some of Scotland's best known fine art and sculpture work. The team are all art school trained, which means they have a sensitivity to unique, strange projects and uses of materials. Artists working with Scott Associates are also able to work from their workshops over their project build.