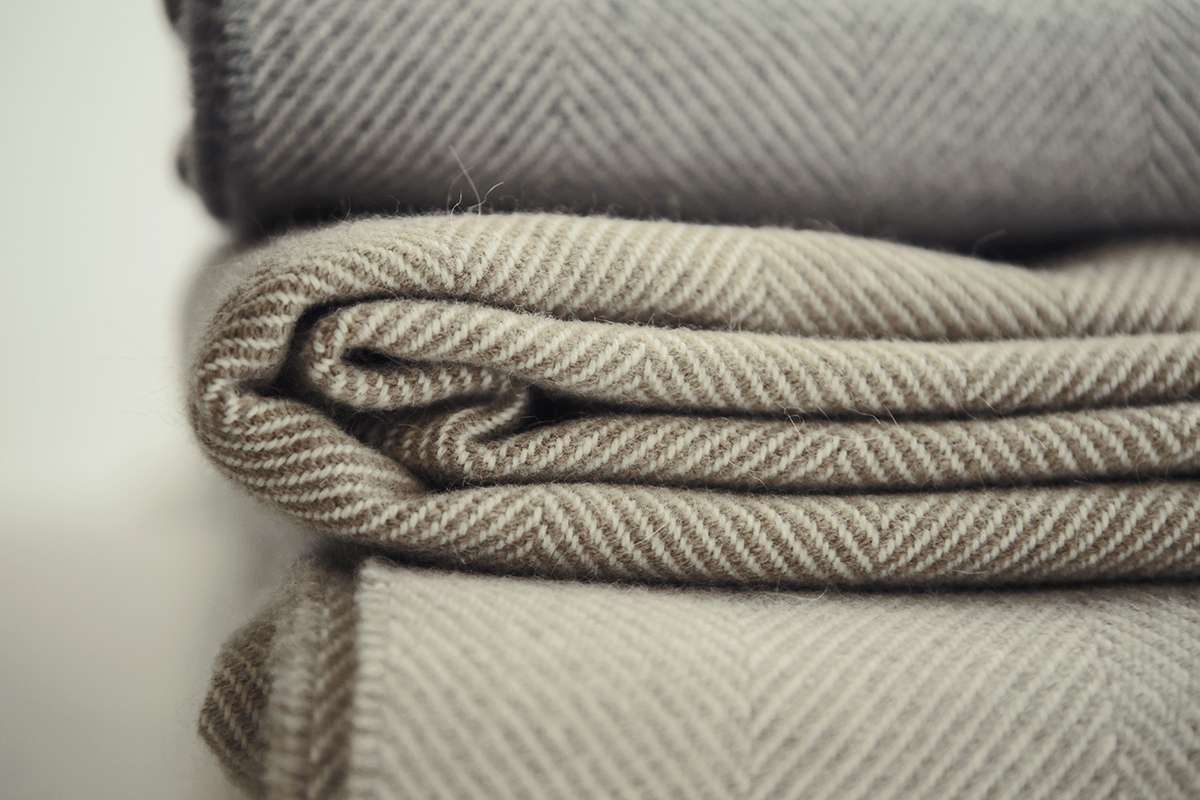 Weaving is a type of fabric construction where two sets of threads, the warp and the weft, interlace at right angles to create cloth suitable for a variety of functions. Weaving is done on a loom, which holds the warp threads under tension allowing them to be intersected by the weft.

Weaving is one of the oldest methods of fabric construction, with some evidence to suggest that the process could date back to Paleolithic times. Thousands of years before commercial cloth manufacture, people had to make their own cloth for clothing, warmth and shelter. Originally the looms used to make these cloths were crude, often needing two or three people to lift the threads manually and could only produce fixed lengths. Similar looms called back strap looms are still used today amongst indigenous tribes in South America. The loom was refined over time to produce many different models, the most common being draw looms, treadle looms, jacquard looms & dobby looms. The types of loom and fibres used varied from country to country as to what was readily available. Wool and linen tended to be the most common fibres used for weaving until the invention of the cotton gin in 1793 by Eli Whitney, which saw a sharp increase in the demand for cotton. Silk was also used, however this was expensive and restricted to China and East Asia until the Medieval period, when the silk trade spread to Italy via central Asia.

Before the Industrial Revolution, hand-woven cloth was commonly produced at home and sold at fairs, until weaver’s began to establish guilds to regulate their trade. Through the guild, a merchant would be appointed to sell the cloth. The hand weavers were restricted by the amount of yarn the hand spinners could supply, making the process disjointed.

During the Industrial Revolution, the invention of the power loom and the advances in spinning   equipment such as the spinning jenny and the spinning mule completely transformed the landscape of the textiles industry. Once a home based profession carried out by craftsmen and artisans became a factory industry, employing several thousands of workers. The power loom’s efficiency dramatically increased the output of cloth which satisfied a growing demand, but this also had a devastating effect on the hand weavers. 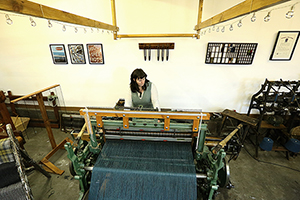 However, hand weavers still remain to this day, although they are in the minority compared to pre industrial revolution. Some weavers use dobby looms and many in Scotland use Hattersley or Bonas - Griffith rapier looms, which are powered by foot pedals. This is how Harris Tweed is woven, but there are also many other weavers who weave tweed in this way.

Most commercial mills now use fully automated looms, although skilled technicians and designers are still required to operate the machinery and oversee the design process. Each mill tends to specialise in a particular cloth and therefore the machinery and terminology used can vary. The most common looms used in industry today are dobby power looms and jacquard power looms. On a dobby loom, groups of warp threads move up and down together. On a Jacquard loom however, each thread can move independently allowing for greater scale and complexity of design. 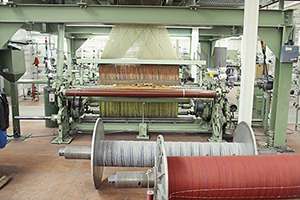 Tapestries, rugs and lace are each specialist processes in their own right and woven completely differently from standard cloth, therefore requiring different types of loom. 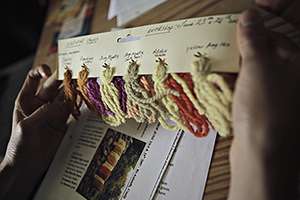 Weaving cloth involves several processes, most of which are preparatory. Before weaving can begin, yarns are selected for their characteristics which when combined with the weave structure and finish, will determine how the finished cloth performs. Wool, for example, is generally used for tweed suiting and jackets as well as interior products as it is durable, warm, absorbent, elastic and has good resistance to fire. All aspects of the yarn must be considered; the fibre it is made from, how thick or thin it is, how the yarn is spun  - each variable will affect the final product.

Once a yarn has been selected, the amount of warp needed for the cloth is calculated. This is based on the thickness of the yarn and the required width, length and density of the final fabric.

The warp refers to the threads that run vertically through the loom. In industry, warps are usually wound on a warping mill, a rotating wheel over which the warp is wound in sections. Many cones of yarn are loaded onto the creel (a stand which holds the yarn), which are then wound off onto the warping mill then onto the warp beam. The beam will then be mounted onto to the back of the loom. This process needs a specialist technician, as any mistakes made at this stage will affect the whole process and effectively cost the mill money. 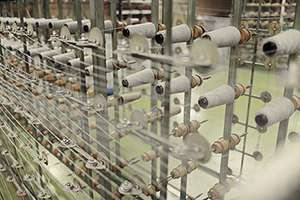 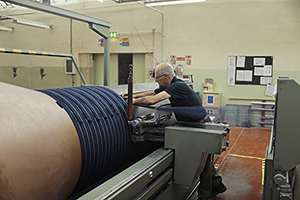 Each warp end is then threaded through a heddle in a sequence determined by the pattern required. Heddle’s are a bit like the eye of a needle and sit inside shafts or frames, which can be lifted up or left down. These, in turn, move the warp threads up or down. The warp ends are then threaded through the reed, a long, comb like instrument with mental teeth. This keeps the warp at the correct width and density and also helps to pack the weft down into place. The warp is then tied to the front ‘cloth’ beam, as this is where the woven cloth will be wound and stored during weaving. Most of the labour involved in weaving is in the set up and preparation of the warp and loom. It is essential these stages are executed with great accuracy and care for weaving to go smoothly. This is the reason why some mills have rather large minimums and cannot cater for sample runs. 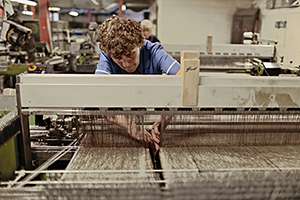 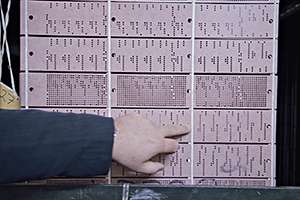 The loom needs a pattern to follow in order to know which warp threads to lift and when. This usually comes in the form of peg plans or punchcards, depending on whether the loom has a dobby or jacquard mechanism. The punchcard or peg plan will tell the loom which heddles to lift and in what sequence. Each time a group of heddles is lifted, a “shed” is created. The shed is the opening between the lifted and stationary warp threads.
The weft is held in a shuttle or rapier, which will pass the weft through the shed to the other side. The shed will close and a different set of heddles will be lifted, creating a new shed and effectively completing the interlacement of warp and weft. There are many different weave structures and countless combinations that can be woven, the most common being plain, twill and satin weaves.

From two sets of threads, a solid cloth is formed. The woven cloth is steadily wound around the cloth beam on the front of the loom until the warp on the back beam runs out. The vertical edges of the cloth are known as the selvedge. It is then cut from the loom and ready to be sent to the darners.

The darners are the mill’s quality control and check the fabric for flaws or pulls, mending any imperfections. If they discover a flaw in the warp direction, they must remove the entire warp end and darn a new one in it’s place, in the correct position. Depending on how long the sample is, this can take a very long time! At this stage the cloth is known as “grey cloth” and cannot be considered complete until it has been “finished”. 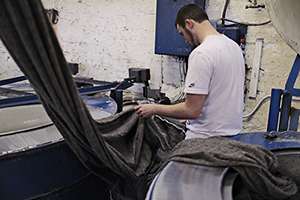 A fabric finishers is where the cloth can undergo dyeing, washing, steaming, pressing, raising and many more mechanical or chemical effects. Finishing can completely transform a cloth or the change will be subtle, whatever happens the cloth will change in some way and generally have a softer handle or drape. Usually the face of the cloth generally has a better appearance than the reverse.

Before the majority of British manufacturing was outsourced to China and India, many towns and cities across the UK were renowned for weaving or spinning including Bradford, Dundee, Galashiels & Macclesfield amongst others. Compared to the mighty industry it once was, it is now a small and specialist sector within the UK, however those that have survived have done so because they represent the highest quality and skills in textiles.

Woven fabrics have many uses, which can be determined by the natural properties of fibres, how the yarn is spun, cloth density, weave structure and finish. Therefore woven cloth can be designed to suit many diverse applications. Although usually sold to the fashion and interiors markets, innovation has seen woven fabrics used in many industries including medical, construction & sports sectors. Generally, woven fabrics drape well and are easy to cut and sew, however the performance of a cloth hugely depends on the factors listed above.


Woven textiles can also have sculptural, architectural and acoustic qualities - one designer experimenting with such properties is Samira Boon. As an architect, Boon is interested in how textiles can transform a space and encourage an interactive relationship with the inhabitants. Focusing on three dimensional woven structures with multi sensory appeal, she has created a range of tactile interior products, their function deeply rooted in the material and structural properties of the cloth. 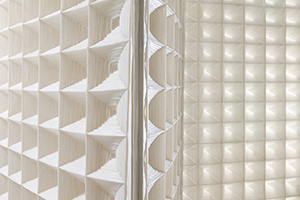 Design led innovation using digital jacquard programmes is now common in design studios throughout the world. However emerging textile brand,  Beatwoven, have created their own bespoke software to translate music into woven designs for jacquard, pixel by pixel.  The results are intricately woven, luxurious textiles which capture the visual essence of the music creating a beautiful memento for the user.

Another area which is rapidly developing is smart textiles, meaning integrating electronics into textiles. This collaborative project; Project Jacquard, by Google Advanced Technology and Projects shows cloth woven with conductive threads, thereby transforming into an interactive, touch sensitive surface that can be used to control devices similar to touch pad technology.

If you’re interested in learning more about weaving, Global Yell and Heriot Watt School of Textiles and Design both offer education, access to facilities and technical support.


Enjoyed our Guide to Weaving and keen to learn more about Textiles? Read our guide to Digital Fabric Printing. 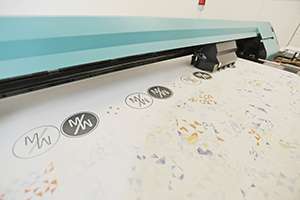 This guide was written by Heather Shields. Heather is a textile designer and weaver specialising in luxury woven fabrics. In addition Heather is a part time lecturer at Glasgow Clyde College and a weave technician at Glasgow School of Art.