Artist Cathy Wade worked closely with Clifton Steel to produce a new piece of public art for Longbridge. We talked to her about the production process.

Can you briefly outline the project - what it was, where it was and why it was!

‘Star Map’ is a work made from laser cut stainless steel that came out of long term research undertaken during my residency with WERK’s Longbridge Public Art Project. It is directly informed by conversations with residents about the history of the site and the diverse skills that were gathered together by the creation of Lord Austin’s car factory at Longbridge. I mapped the Longitude and Latitude and date of Lord Austin’s first speculative site visit to the car plant to explore the night sky present that evening. This enabled me to look at a specific situation and place, that has been through much flux and change through a single enduring event. The night sky is a constant for us, it shifts with time and seasons and gives us a guide to our location, this all felt very pertinent to the redevelopment of the wider site, that the role of the factory should offer a wider citation of the ingenuity and skills present in Longbridge. 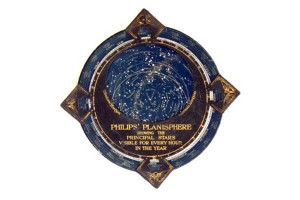 How did you come to work with Clifton Steel? It sounds like it was a conscious decision to manufacture locally? Was that important to you?

It was integral to the works connection to history and site to work with a local manufacturer. This has been a constant throughout my work for the project and often leads to unexpected and rich conversations. For instance, Service Point Birmingham have been really great at supporting my last minute deadlines and demands for A0 neon prints; ever since one of their workers drove past a set of posters I had made for a project with Turves Green School on their commute home.

As ‘Star Map’ focusses on the specialist skills that manifested in Longbridge it would have been a great shame to bypass the potential for a really beneficial conversation with a manufacturer in the city, for a project that you order in from somewhere else. A few years back I attended a talk by Mike Smith Studio and was really struck by the conversation that was being had about the presence that artists had through the manufacturing process, that they were there all the time or handed over the plans and waited for the final result. I really wanted to be able to see what was happening with the work and understand the complexities of its transformation from a graphic into a physical work.

How did the process of working with Roger and Clifton work? Was it a simple ‘translating' job, i.e. you had a very clear idea before you started and they just realised it, or was it more of a conversation where the work developed though your engagement with Clifton Steel? Was there anything unexpected?

The first conversation I had with Roger was about the maximum dimensions that they could laser cut a sheet of steel, luckily what could be cut pretty much mapped what I needed. Roger totally got the project, which was an amazing thing to have with a manufacturer, so it was a case of designing the work and delivering it in a format that could be interpreted by a laser cutter. I explored how the scale of ‘Star Map’ would work through an exact size drawing in my studio. I wanted a sense that the work was not going to disappear on the wall it is placed on, and that it worked as a constituent part of the wider lighting scheme I was working on. 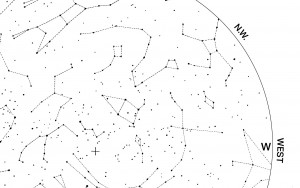 I was keen at this point not to work digitally, that the laser cut marks should reflect my drawing process and feel organic in the final work. The drawing was then translated into a CAD file, which was the crucial point in which the work would either land or completely fail. Here Clifton was really supportive and allowed me to be present through this process, we discussed the elements of the work that could be laser cut and those that needed to be engraved. The work has been formed by Clifton’s understanding of materials and their willingness to really converse with you how best to realise what the work could be. We had to resolve how to make the work into a lightbox and this was where Roger really problem solved things in a way that I would have struggled to do. I really appreciate the skills that they brought to the work, and the interest that they took in its creation and realisation.

Weirdly the most difficult point in the project was the works installation, we had to drill a hole through an external wall to get to the works fuse box. This involved getting one of the biggest drill bits that any of us will see in many years. 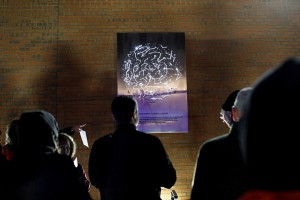 How long did the whole process take?

Any project in the public realm has a long time scale, from its proposal as part of a wider scheme, the discussions that are undertaken with planners, developers and engineers. As with all works made over a long time period ‘Star Map’ went through many changes, how it functions and what it says was looked at with a high degree of criticality that helped the work develop its character as an element of the lived environment of Longbridge. From the initial commission discussions with St Modwen’s to the works final installation was just under two years. In terms of the works manufacture, once we had agreed the plan for the work it was manufactured in stages of cutting, polishing, engraving and proofing for the external environment.

Top tips - would you do anything differently next time? Did anything work particularly well? Or not turn out quite like you anticipated. What would you tell yourself if you could go back to the future!

I would always like to go back into the future …. imagine the potential there. If I was to go back to look at this project, I’d tell myself that Clifton Steel were going to be great supporters throughout the whole process and that they were going to realise ‘Star Map’ to exactly the level that I hoped the work could manifest at. When I went to see them in December last year, I realised that they had produced something that lit and unlit felt really exciting to me. That it had been a real privilege to work with them and that if I really needed to extend anything it would be my working knowledge of the fonts I could use for the work. It’s always tricky to put text next to an image, it can make both elements feel over obvious. It’s the one aspect of the work that I sometimes look at and wonder how else it could function, but that’s what development of your practice is there for. ‘Star Map’ is the anchor of the wider lighting scheme, there are a lot of other aspects that I’m still finessing in terms of how the lighting round it can work. I really enjoy the fact that it now has it’s own life, switching off and on with evening and dawn and that it will be a constant (as much as any public work can be) for the pedestrian route into Longbridge.

You can find out more about Clifton Steel here, and contact them to start a project here

Why Make Work Locally Alan Moore and Ten30 Fashion Tips for Manufacturing in Scotland A Life in Lace In the Belly of the Beast: my one year manufacturing for Coca Cola