In the Belly of the Beast: my one year manufacturing for Coca Cola

Cat Cochrane gives some insight into working "doon at Schweppes" in East Kilbride.

In 1998, the Britpop that had consumed me for four years was officially dead, Scotland played in its last World Cup tournament and that crazy notion of an information super highway was teetering on the brink of world domination.

Meanwhile, I was teetering on my 22nd year and stuck in a rut of endless part time jobs in and around East Kilbride. University as an option had slipped unceremoniously by and even if I’d embarked on a drubbing of ill-chosen academia, it would likely have rubbed the free spirit - I blindly sought to chase - up the wrong way.

A concession was made to my pursuit of boho when, in the summer of ’98, I found myself applying for a job at Coca-Cola & Schweppes Beverages in the industrial estate on the edge town. There was something undilutedly cool about the idea of working at the plant on the reaches of my lifelong stomping ground, renowned and more affectionately referred to locally as “doon at Schweppes.”

It was the place where as kids we’d tease the security guards to distraction, jump the wall and make away like bandits with empty bottles for later exchange with ice cream van owners. Mums and dads and aunties and uncles were proud of their relations knowing they worked at Schweppes. Being recruited within its walls was akin to joining the police, as in you were regarded as having a steady job for life once you'd got a foot in the door. The plant was part of the new town factory fabric, and had risen to the echelons of respected workplaces saddled next to Motorola and Linn Products.

I’d been chosen as one of eighty-eight applicants from a list of 1,000 across the UK to be part of a pilot scheme in its second year. The company had decided to follow a German style recruitment and training blueprint known as SkillStart, which offered a challenging two-year work stint in manufacturing, distribution and marketing, coupled with a distance learning Btec qualification. I started on my first ever salary at £11K, which at the time gave me a sense of worth even before the first pay cheque.

Call it naivety, call it hopefulness, but I remember my image of the plant prior to my first day resembling somewhere between the schmaltz of The Holidays are Coming Christmas commercials and a sterile, futuristic roofed landscape where no politics, misery or slow clocks existed.

When I rolled up looking the part in my ill-fitting royal blue uniform, stiff peak hat and weighty steel toe-caps set for my line leader’s inspection, I was met with the titter of, “Aw here comes the new wee YTS lassie.” The scene was set and the lie of the land had been rolled out within those first few minutes.

Working in any factory can feel like residing in the belly of a beast, where the smell of an outside world is a far off place in the day-to-day. Not long into my experience in the manufacturing depths of one of the largest organisations on the planet, fuelled with a mix of chauvinism, clique and contentious safety practices, I quickly fell into an unpredicted paradigm of rotting abyss.

My office-based manager was a gentle, rotund man with heavy booze consumption, clearly living on his wits by day and whisky by night. Forms handed to him a fortnight previously sat on slush piles for their own amusement. I was placed on Line 3, where two litre volumes were carbonated, filled, labelled, and capped. I shared the tight space with a sturdy middle-aged woman who wasn’t impressed to give up one of her three changing room lockers at my arrival. A female presence on the shop floor was small and my hardy colleague was afforded a wide berth to swear like a trooper. She gave a devil’s eye from one hundred yards and turned out to be a harder nut to crack than those with a season ticket in Club Misogyny.

Sixteen years ago the smoking ban in Scotland was just a murmur on the new parliament’s puckered lips. If my trainer on any given week was a smoker, we’d share the same breaks and with the offer of a cup of hot tomato soup from the perfunctory Klix vending machine, I’d be obliged to sit in the tar-stained room that measured no length at all by no width to speak of until my lungs filled up to the point of pass out. 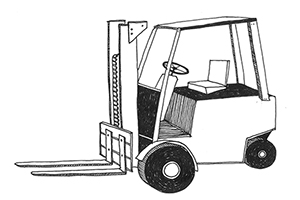 I earned my forklift truck licence following a week’s intensive training, formed predominantly by a thousand reverse circle of eights. Instructed by a patient Jon Bon Jovi hairdo-ed, aftershave-soaked type who’d give me a lift home in his Toyota MR2 after every session, the skill he forwarded would come in handy on the Isle of Man at a later date.

When I walked away one Friday evening a year since my first day - never to return - it was like being given the key out of Sing Sing. I realise since that I’ve never retained all the things I’d been employed to learn. The last straw had been the discovery at a marketing seminar that the company was hell-bent on toppling Irn Bru as the nation’s favourite soft drink, and that Scotland was the only place on earth where they hadn’t achieved in doing so. It perturbed me that they couldn’t just let that one lie. The monotonous din of hours of clinking split bottles, the aroma of colleague misery and the penny-dropping realisation that the bigger the number the more the amoeba I was put paid to my return to the boho hobo life.

The one happy memory I did take away had been in finding the “special tap” that dripped undiluted Coke syrup prior to carbonation. The Coke process stated that seven parts water be mixed with one part syrup. I swear that secret sorghum made me high as a kite that day. The releasing of that valve was like finding a holy grail of the world’s best sugar buzz.

Years later the irony is, and for sentimental reasons only, I’ll never knowingly touch another Coca-Cola product ever again.